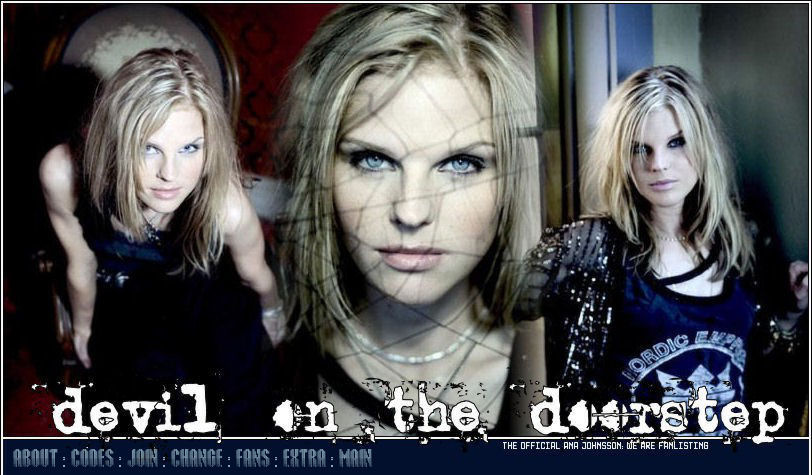 What is a fanlisting?

A fanlisting is a place for all fans of a particular subject to come together and build the biggest listing of people all around the world who are fans of that subject. It is an online list, no mailing list though so please do not send any personal messages here - they will not be forwarded to the subject of this site. - according to Janine Mischor, founder of The Fanlistings Network, the original (but not official) web directory for fanlistings, dedicated to uniting the fans.

When you join, your name, country, email address and website (if applicable) will be displayed. The members list is intended to make it easier for fans of the same subject to get into touch with each other - through email or websites.

It's Ana Johnsson's second single that got published. While she only gave her first name when her first single "The Way I Am" was published she decided to give her full name that time: "I'm calling myself Ana Johnsson now because I've realized that I have something to say. When people hear the name "Ana" on the radio it's very ananymous."
Now Ana Jonsson’s new single receives the kind of honour that could indicate a crucial boost to her international career. ”We Are” will be the first single to be lifted from the soundtrack to the forthcoming blockbuster ”Spider Man 2” which basically kick starts the whole campaign for the film (that opens in Germany on the 8th of July). While the line-up for the first OST (released in 2002) included well-known international rock acts like Nickelback frontman Chad Kroeger, Aerosmith, Sum 41 and The Strokes, this time it’s Ana Johnsson’s turn to present her pretty face to the cameras in between the spectacular CGI sequences. The video clip for ”We Are” will include breathtaking footage from the ”Spider Man”-Sequel.

With the help of AnaJohnsson.com

All contents are © 2004-06 Devil on the Doorstep unless otherwise specified. This site is in no way affiliated with the artist or the song. It is an unofficial & non-profit fanlisting. It's no mailing list. Messages sent to this site will not be forwarded to subject of the site.
An Innocent Eyes Production.